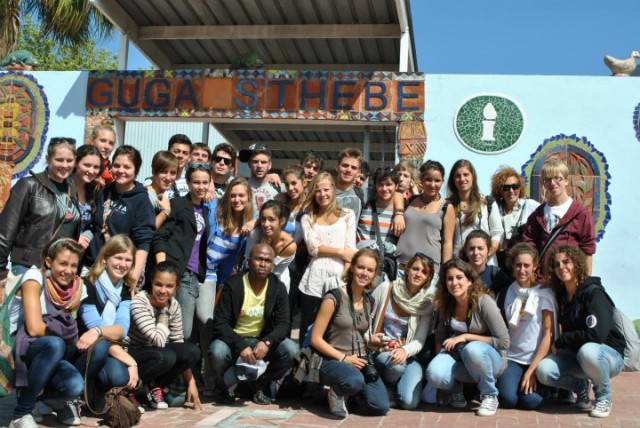 On the 7th of September I took a plane for South Africa with all my friends from the Rainbow Experience. We were all hosted by Camps Bay High School students. Everyone except my partner and Lorenzo’s came to Italy in March, but even though we had less time to build a strong friendship, by the end of the trip Cole was like a brother to me. We stayed in South Africa for ten days and the days I enjoyed the most were the ones in which we went to see the animals. The first time we saw the animals was on a game farm, there we had the chance to see all the typical South African animals including the African buffalo, the springboks and a mongoose, a very rare animal. Then, another day we went to see an ostrich farm, a lion pension (the owner of the place tries to get all the badly treated lions and puts them in this pension until they die) and a crocodile farm. I did not really like the crocodile farm because there they would breed the crocodiles so they could kill them and sell them, not save them. In the last few days we went to the seal island, the penguins’ beach and to Cape Point where, unexpectedly, we got the chance to see some whales. I enjoyed very much staying there and living like a South African boy. If anyone asked me if it is worth the time doing a similar experience I would definitely advise him to take part in it because you come back culturally richer in spite of an empty wallet because of all the nice and curious things you can buy there like my vuvuzela and rugby ball.

I think I’ll keep the South African experience in my heart forever*. In South Africa we saw extraordinary places and had the opportunity to live for some days with culturally different people.

In Cape Town, where we stayed for ten days, we did a lot of things, each of them interesting and unforgettable. Of course we visited only the most important and typical places, for example Robben Island (where the ex SA president Nelson Mandela was imprisoned for 27 years), which is today one of the World Heritage sites. One day we took a Red Bus to go sightseeing all over Cape Town that is, for me, not so special. A day-trip that I enjoyed (liked) a lot was the visit to Bortholomew’s Klip. This is a huge farm (16000 hectares) where *animals such as (2) buffalos, zebras, duikers, springboks live in the wild which we saw on jeeps. During our journey we also *visited other (1) parks and farms where we saw other (1) typical African animals such as (2) lions, ostriches and crocodiles. All these establishments have a common goal: the preservation of African animal life.

The place I liked most was Cape Point, the extreme* tip of Africa, where the Indian Ocean meets the Atlantic Ocean and where it (3) is really possible to catch the line where the two opposite currents meet. There we unexpectedly saw some whales. It was so exciting! Another day we went first up the Table Mountain (that is so named because of its flat shape and is a candidate to become one of the seventh world’s wonder) and then to the township, where poor people live.

In my opinion surfing was the funniest experience we did! One, fortunately sunny* day (because the weather had been cloudy and cold for all the week), we went to a very vast beach where after a short training, we tried to stay up on our table and surf the waves. It was a very difficult attempt! My host family was very friendly to me, indeed they let me go to the World Cup Stadium with other (1) Italians, to see an important soccer match: Johannesburg vs Cape Town. The game wasn’t very good but we felt true soccer supporters!

I’d say many other things, but the most important was that I’ll never forget this wonderful country and its fabulous people. 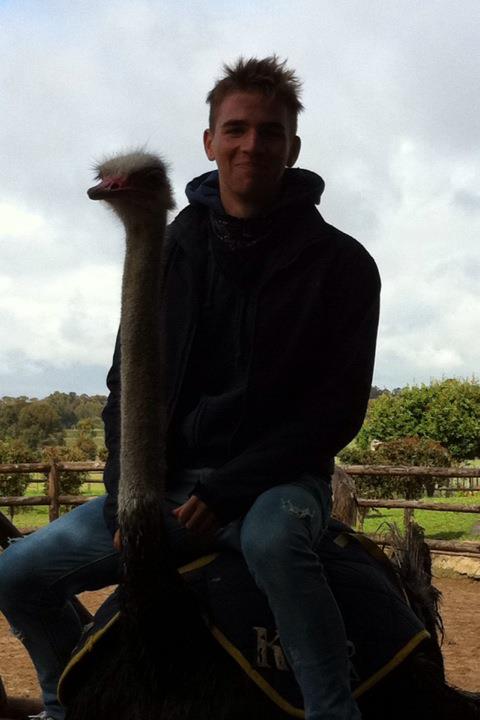 My favourite day was the second Friday because we went to see the penguins and then surfing in the ocean! The water was very cold and we wore a wet suit. It was amazing and I am sad I cannot do that sport here because I loved it. It was hard to take the waves in the correct way at the right moment and to stand on the surfboard but when I could do it I felt very proud.

The feeling between us and our South African partners was great. In fact we went all together to watch a football match in the stadium of the World Cup and we went to the beach several times. Also, Tamia organized a party at her house that was a very happy ending for a great Friday. The last night we went to a Greek restaurant for the farewell and the day after we took the airplane to Istanbul to come home and everyone was sad. I was very lucky to be in this project and I will bring this experience in my heart forever.

The most amazing experience was surfing. Surfing instructors gave us our wetsuits, to keep warm in. First we listened to a theory lesson. We simulated the movements on the surfboard on the beach.Next we had to swim with the surfboard far from the shore, where the sea was deeper. Then we rode the waves, which were two meters high, liying on the board and rising in a couple of seconds when the wave was under our chests. I did it, but I couldn’t turn right or left with the board. I tried to but, every time, I fell into the water. We happily surfed for two hours. When still in the water we saw a shark-flag, which meant that some people on the mountain (they were all around us with IR binocular) had seen something dangerous, maybe a shark. So they rang the alarm and everyone left the water. No harm done: it was lunch time so we had a pic nic lunch on the beach all together.

Claudia Marangon, 4 A PNI, Here in New Zealand I’m having a lot of fun, even though I have to go to school! School is so different here, I can’t say if it’s easier or harder, because it’s just so different! I’m attending year 12 at Takapuna Grammar School, which is one of the best […]